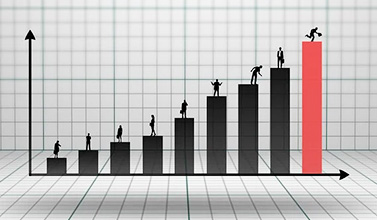 The U.S. economy has recently shown signs of a nascent and strong recovery due mostly to the impact of sustained doses of fiscal and monetary stimulus initiated by the Federal Reserve,  Congress and the growing hope the economy continues to improve fueled  by the progress being made nation-wide in rolling out vaccines to bring the Covid-19 pandemic under control. Consumers and businesses now believe they have dodged the pandemic’s worst-case financial scenario and better days are ahead.

Across the nation, the SBA’s Paycheck Protection Program (PPP) – the government’s small business bailout-  has been the major force behind the upsurge in small business lending and helping keep established and struggling small businesses afloat. With government assistance, many borrowers were able to continue making regular payments on existing debt with the help and inflow of PPP funds.

Higher Revenue but No Improvements in Profit

The timely actions and intervention by the Federal Reserve and Congress have been major factors softening the adverse economic impact of the current pandemic. Without these timely financial incentives banks could have been severely affected not only by the increases in credit risk on loans to businesses and consumers but also by the adverse impact of decreases in consumer demand across all sectors in the economy. With trillion of dollars in fiscal stimulus and the current low interest rate environment, there are reasons for optimism. However,  how well Community Banks, especially those under $ 1.0 billion in assets will fare out during the recovery is highly dependent on how these institutions fine tune their risk management strategies and respond to the net interest income challenges that have surfaced due to the pandemic.

Fueled mostly by the SBA’s PPP, lending by Community Banks has accelerated leading to substantial revenue growth. However, this growth in lending has not been correlated with improvements in their profitability and has contributed to many Community Banks to experience reductions in Net Interest Margins.

Although experiencing major growth in revenues, the outsized share of PPP loans in Community Banks’ balance sheets poses a major challenge to their profitability, since in addition to the forgiveness terms and government backed guarantees, PPP loans operate at the mandated interest rate of 1 percent – a rate significantly lower than any other type of loans. This limit imposed on the rate banks can charge on loans poses a major profitability constrain on Community Banks with their outsized participation in the SBA’s PPP.

The high share of PPP loans disbursed by Community Banks, besides pointing out constrains to their profitability, also highlight the risks of the over reliance on undiversified sources of revenue as a sustainable, reliable and profitable long term strategy.